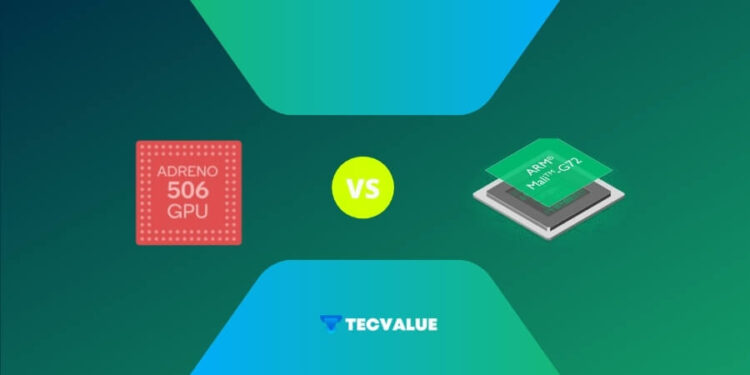 So today we are gonna battle it out between Adreno VS Mali, the ones that rule the Mobile Gaming World as we know it, and let’s see which one is gonna win, or at least which one is going to give a better value as an owner of mobile having either of these GPUs.

There has been a common chatter that Adreno, owned by Qualcomm, is the better of the two, but we are going to exhaustively analyze every domain of GPU components to give a better idea about what you should expect from these GPUs and give you a better idea before you walk out of here tech-wise.

The graphics processing unit, or GPU, has become one of the most important types of components in a mobile phone, gaming or not, as a GPU is used in a wide range of applications, including graphics visualization and video rendering.

Although they’re best known for their capabilities in gaming, GPUs have become more popular for their use in creative production and artificial intelligence on every platform.

GPUs were actually designed to accelerate the rendering of 3D graphics, but as time progressed, they became more flexible and programmable, enhancing their capabilities.

The GPU evolved to complement its close cousin, the CPU. But it’s grown big enough to be an important part of the computing system on its own.

While the terms GPU and graphics card are often used in the same sense, there is a clear distinction between these terms. Much like a motherboard possesses a CPU, a graphics card refers to an add-on component that incorporates the GPU.

This GPU Board includes a slew of components required to both allow the GPU to function and connect to the rest of the system for a smoother workflow.

Mobile SoCs have a specific GPU and it is integrated into the chip itself. A GPU cannot be separate from the SoC. Hence, every phone out there with a Snapdragon will have the same Adreno GPU and every device with Exynos or Mediatek will have the same Mali GPU. However, two different SoCs can have the same GPU as well.

SoCs like the Helio G90T, Snapdragon 730G, Snapdragon 855+ even have an overclocked GPU and will deliver slightly faster performance over their counterparts.

Adreno is the GPU series developed by Qualcomm for use in their SoCs. Companies like Xiaomi, LG, OPPO, and many other phone companies use it for their mobiles as it is purpose-built for mobile APIs and is flexible for mobile constraints.

They were previously known as Imageon when they were first developed by ATI Technologies (which later got acquired by AMD). AMD then sold it to Qualcomm and they christened the name Adreno, and the rest, as they say, is history.

Adreno is embedded into Qualcomm snapdragon Soc’s while Mali is paired with Mediatek chipset. The reason we put it that way is there is a big structural and architectural difference between a SOC and Chipset.

A chipset is a set of functional circuits in an integrated circuit that controls the data flow to and fro all over to the processor. While an SoC is a CPU, graphics card, memory controller, and other components all rolled into one single chip.

Now let’s talk about Mali ( No, not that African Country Doofus ! )

Mali is the GPU series maintained by ARM, they are used in most of the phones having MediaTek but also Samsung and even Nvidia.

Mali GPUs were first developed by Falanx Microsystems, which was a spin-off of a research project from the Norwegian University of Science and Technology.

ARM then acquired Falanx Microsystems in 2006 and renamed the GPU in its present form.

Unlike its counterpart Adreno, Mali is paired with its SoC’s. This means it can be used by multiple chipsets as GPUs, lending it flexibility in an otherwise versatile environment of Mobile Gaming.

Mali is usually cheaper than other chipsets, even a new smartphone company, without much investment, can integrate their products with these chipsets, that is why you see a lot of budget-oriented smartphones coming with Mali GPU as their Graphics Core.

But then again, even Exynos and Nvidia chipsets use these GPUs, so one cannot write it off as low-end and mediocre-performing chipsets. They can very well pack a punch with their high-end chipsets.

Which is Better for Me?

Now that would be a tricky question, as both are capable GPUs in terms of performance and flexibility in adapting to challenging workloads.

Before we venture off to the comparisons, let’s make some things clear.

A GPU’s performance is measured in Gigaflops, and Gflops means a billion floating operations per second, which is a very big value, considering the fact that counting to a billion itself takes over 32 years alone!

GPU performance is also measured in Triangles per Second, which is also remarked to be the most idiotic way of measuring GPU performance by some in the  ARM community.

In fact, on most GPUs today, triangle throughput is not even a relevant metric. Mobile GPUs today can easily support 100 to 200 million triangles per second.

Additionally, this number can even exceed excessive metric cases such as one triangle per pixel at 60 fps in 1080p.

Now, The World Of GPU metrics can turn you crazy as the complexity of the underlying architecture and the overkill of terms like vertex, triangle, shader, and cores can make you light in the head, especially if you are hearing these for the first time.

But have no worries, as we are going to compare with the qualities of both the GPUs, rather than having a spec showdown by using a ton of benchmarks.

Adreno VS Mali: Which Performs Better?

This might be the topic of most concern for many of the readers, and we decided to tackle this pressing question first.

Now let’s get this out of the way, Adreno’s performance has always consistently been higher than Mali’s across many devices ( except 2 or 3 exceptions in Mali’s high-end chipsets).

This is why top-end games such as Asphalt 8 or PUBG  fail to play efficiently on Mali GPUs.

This may be also because of a lower number of cores in Mali Chipsets, as opposed to Adreno having Qualcomm SoCs with top-notch cores.

The Number of cores in Mali GPUs can be known from their codename. The number after MP shows the number of cores it has. For example, “Mali-T880 MP12” has 12 cores while Mali-G72 MP18 has 18.

Adreno has a larger set of API i.e software developer tools and their newer versions than Mali.

But Mali has the upper hand due to a larger distribution as it can be paired with any chip, Exynos or Mediatek. Thus 1 out of 5 smartphones sold in the world uses Mali as the core of its graphics processing.

As a result, the proportion of Mali GPU users in the market is greater and game developers always optimize them in the first place.

Having lower clock frequencies and multiple processors, Adreno GPUs are more powerful and less likely to overheat. While Mali GPUs can go inferno due to the high clock frequencies while you are using Spec-demanding applications or playing Top-end games on your mobile.

Adreno GPUs are pricier due to Qualcomm being an American Company, and managing more payment for licensing of smartphones than ARM Mali competitors. Therefore, the chipsets are way more expensive when you go for Adreno, making Mali chipsets more budget-friendly.

Thus giving an edge in frame-rate and video rendering which translates into better gameplay and visual experience.

The General rule of thumb is that a better fabrication process leads to a faster and efficient GPU. This is quite important when it comes to gaming, As older chipsets using the outdated 28nm often overheat on extended gaming.

This evokes the need for more graphics cores, as two GPUs with the same architecture but a different number of cores can have a significant impact on the performance.

Adreno usually takes the cake in this segment, as Qualcomm stresses its multitasking efficiency, and thus allows its GPU to be the best in this department, and Mali falls behind even though it has 12 cores in some of its chipsets.

The higher the GPU frequency, the better will be the performance of the GPU, which has always been the case for every metric and benchmark ever created.

But, GPUs with the same architecture may have a different clock frequency but this does not lead to a significant difference in the performance if they come from the same manufacturer. ( We are looking at you Mali.

Mali beats Adreno in this department, as it has consistently shown higher Clock Frequencies, excluding the power-amped Snapdragon processors like the 730G.

All in All, both are very capable GPUs, as you might have observed from the stats above.

Now if you ask us what we would prefer if we were going to suggest you guys a high-end smartphone specifically for the use of gaming and heavy multitasking, we would most probably ask you to go for the Adreno one.

That’s because they are more powerful and efficient when it comes to devices they usually come with. That’s not to say that Mali chipsets are handicapped, and not fit for gaming, as many high-end Huawei and Samsung phones still use Mali as their GPU, and they work just fine.

But lower-end Mali chipsets are best for the budget line, and Snapdragon Chipsets with the Adreno GPU have recently started to appear in budget smartphones, but only time will tell whether they can achieve the worldwide monopoly that Mali has achieved in distribution.

If so, please check out the rest of the articles here.

Is Huawei Better Than Samsung? An In-Depth Analysis [2022]