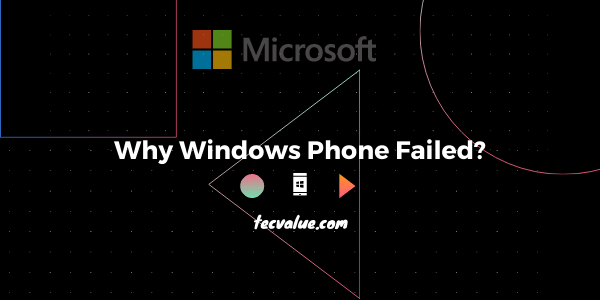 We still haven’t got over the fact that Windows Phones has failed. I still remember the time I was gauding over those Lumia phones, with those gorgeous specs and entrancing Live tiles, which mimicked those animations we have in our Windows-powered Laptops.

Those megapixel-amped cameras and a whole slurry of colors, paired with a powerful chipset had attracted many an eyeball at that time, Microsoft and Nokia had everything going for them then, which begs the question, why did Windows phone fail, despite Nokia having a large monopoly in the phone industry, and Microsoft has more experience in Mobile Software than Google or Apple at the time…

Now, Let’s solve the big mystery of why the Windows phones failed to attract the masses!

Lack of Foresight for Windows – $8 Billion down the drain

Steve Ballmer, the then CEO of Microsoft, was very enthusiastic about the sales of Zunes.

He even said that he never even dreamed of Steve Jobs’ Iphone taking over, and giving Microsoft and Google a run for their money. But Apple had the last laugh, as they beat Microsoft at their own game.

The Windows Phone entered the Arena very late, as the IPhone had taken the centre stage, and Google’s Android had already got cozy with a steady and growing user base.

But Microsoft still had a chance to compete and turn the tide, as the resources and experiences can allow it to develop further.

But they believed Traditional laptops were still the best call in terms of performance and experience, as remarked by a former engineer at Nokia.

Foresight is an essential element for any business, and the neglect of this aspect has cost Microsoft very heavily.

Talk about watching 8 Billion dollars burn away, just because you were too lazy to smell the smoke coming out of your pants!

Microsoft wanted to recreate the Apple ecosystem, by manufacturing their own hardware and software, which led to the creation of the mobile version of the very functional Windows OS.

But they were too late in handling the repercussions of that untimely decision, and by the time they rolled out the software, no developer wanted anything to do with it.

Microsoft finally coaxed Nokia to give up their old  Symbian software and install their version, which eventually turned out to be Nokia’s Nightmare !

Microsoft ended up buying the Mobile division of Nokia for 7.2 Billion dollars in 2014 and had to shut shop 3 years later because no one wanted to develop and cater apps for the already dying WIndows OS.

Had Nokia played their cards right, they still would have made it then, but it’s still refreshing to know they survived that ordeal.

Had Microsoft been willing to compromise on its control over production, it would have easily convinced the big manufacturers to use Windows Phone instead of Android.

They had made a paid license agreement for the use of the software, similar to the license key we have in  our computers. They just assumed that what worked for them in computers, might work for them in the Mobile sector, but boy, were they wrong.

Nokia didn’t seem to have a problem with this, probably because Microsoft had been pouring over a Billion dollars to get the bandwagon going for its OS, which made the other phone companies like Samsung and HTC hate Microsoft even more.

Even though Microsoft had played the Good Samaritan role at times, they still had a bad reputation of trying to get their hands greazy on all the profits, and that has cost them big time.

From what you read above, Microsoft could have easily avoided these losses if they were more open minded about changes in technology and warier of the impact that phones can make on user experience.

Now, Microsoft has unveiled its “Surface” lines of dual screen phones, which are, by a cruel twist of fate, by Android, a software they deemed too cheap to use in their products.

Like they say, “ If you can’t beat them, join them..” and Microsoft sure did.